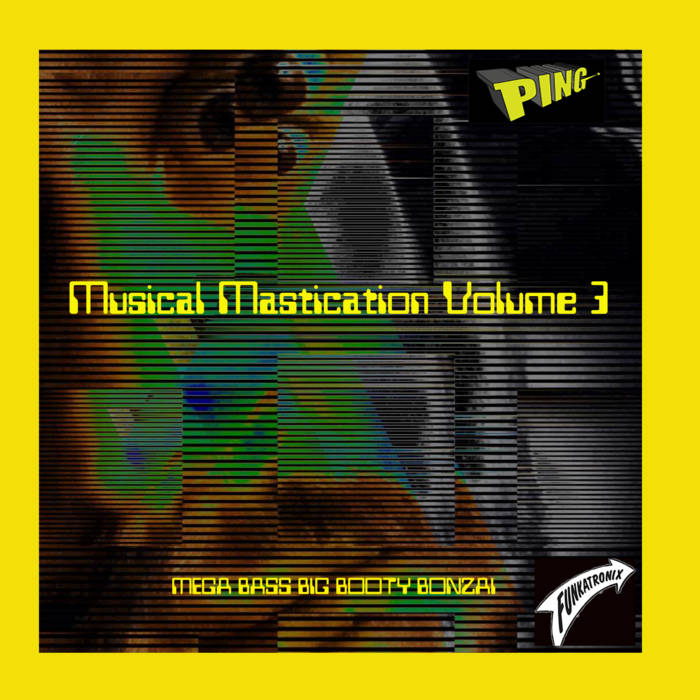 myoptik It's wall-to-wall on this vivid collection; like a tube train packed with your favourite confectionary. Every track is a blinder. Favorite track: cm222 (online preview edit).

Musical Mastication Volume 3 was originally released as a CD in a much reduced form of just 23 tracks - for that was all we could squeeze onto the disc. This download version has an extra 8 tracks, and we saved some of the best for this format. The CD was released to coincide with, and celebrate, Silver Vine Arts "Summer Art Thread", which was an art and music event at LCB Depot on Saturday the 26th of August 2017, as part of the Leicester City Festival. At the event Myoptik's Summer Art Sound Ceremony provided 10 hours of live music. The CD, and this greatly expanded online download, collated by Myoptik, showcase many of the great artists associated with the event, as well as artists Myoptik has collaborated with through PVC promotions over the last 17 years.
The set is a musical rollercoaster ride of awesome talent, with many fine Leicester acts featured, along with fantastic producers from far and wide. Without exaggeration every act, every track is a highlight, and nearly all of them are exclusives, unheard elsewhere before, with a couple of well known recent favourites added for good measure. Let's take some examples:
1990s electronic pioneer Bedouin Ascent who made music for amazing labels such as Ninja Tune, Virgin, Lo Recordings, Leaf, Sub Rosa, Law and Auder, plus countless others including his own No Immortal imprint, here donates an exclusive preview of a track he made in 1990, which he will be releasing as part of a collection of some of his early electronic adventures. Bedouin Ascent's appearances on Myoptik's Sonar Radioshow in the late 90s and early noughties brought exclusive session tracks to the airwaves.
Min Y Llan is the moniker of Touched Music label boss Martin Boulton, which raises funds for MacMillan Cancer Support. His featured track is the one used for the amazing promo video he donated to hype Myoptik's Summer Art Sound Ceremony during August.
Kams is best known for his work in Normal Position in the early 2000s. He and Myoptik shared bleeps on stage around the turn of the century, perhaps most memorably in a dodgy old, since closed down, pub called the Braunstone Gate.
Peata Out is a long-term project between Myoptik and Francis Binns. The two often collaborate together in many guises, but Peata Out is the favoured route for expression. On here we have a special preview of the first third of an epic track that will be on their next release.
Reflexicon and Data Out were the co-founders of Ping-Discs with Myoptik back in 2002, the first 3 releases, long out of print, marked the 3 debut releases for the label. Reflexicon, like Myoptik, went on to release music on TheCentrifuge in the noughties. Data Out meanwhile went on to work for Trevor Horn in his famous London studios.
Misterben, like Myoptik, has worked with BJ Cole. All 3 shared a stage for an infamous gig in Coventry. The Misterben track here is one of his early forays into the world of modular synthesis.
Myoptik first met Cursor Miner on the coach to the Monastery of Sound festival in Normandy, back in 1999. Since then the two have collaborated through their Napoleonic Thunder project and shared stages in places like Berlin, London and Leicester. The Cursor Miner track comes from his dusty vaults of high-powered techno monsters.
Roy Of The Ravers is most recently famous for being featured in the Aphex Twin live set at Field Day. In the past he also loaned Ceephax his 303. His take on acid is in the same stratosphere as both of them. Myoptik featured on his releases for TheCentrifuge and the pair are exchanging collaborative ideas even now.
Shrimpsalad is the comedy duo of Heinz Jaki-Volvo and Maggie Festering Cheese-Lowt, best known for their radio shows on DemonFM and ResonanceFM around the turn of the century. On this compilation they mostly provide surreal segues betwixt other tunes in the collection.
Steph Horak is best known for her audio-visual installations and improvised electronics. Her track here captures her visual powers in purely aural form, demonstrating the power she brings to the art of sound.
The Horn is best known for the legendary Villager EP, as well as for his releases on Mark Pritchard's Universal Language record label in the 1990s, and Z-Bop thereafter. He and Myoptik have a collaborative release due soon on Law and Auder.
Nanobot, like The Horn, is an associate of the legendary Z-Bop label that was co-run by Clatterbox and his electro focused mixes keep the bleep alive in the West Country.
Cyan was a collaborative project between Matt Preston (Phaeleh), Steve Morgan and Myoptik. A trio got together to perform at The Summer Sundae Festival in the early 2000s. They made page 3 of the local press for their main performance, but the track here was made in the lead up to that event. All 3 collaborated in many guises during that era, on radio, on stage and in many studio jams.
Also featured here are great tracks from Leicester favourites Dayflower, Jouska, Orphaned, Zyweth, Pale Blue Dot, Mess Yourself, Phool and Sepia Sun. Extraordinary musicians with great live sets they form the backbone of the amazing music scene in Leicester.
Overall this is a really nutritious and wholesome portion for you to masticate on to your hearts content, indigestion is unlikely..

Music curated by Myoptik. Individual track credits are on the tracks themselves.
The compilation is a Ping-Discs release.
Catalogue number p-tipple-tee-tipple.
Copywrite Shrimpsalad 2017.
Artwork by The Horn and Myoptik.

The home of Ping-discs, Myoptik's label for exciting, happy and outrageous music. Many excellent artists have been part of Ping-discs over the years, not least through the series of great compilations that you will find here. There are also solo releases from Myoptik and some of the other Ping-discs artists. Expect variety, much of it electronic, but certainly not always, none of it normal.... ... more

Bandcamp Daily  your guide to the world of Bandcamp

Featuring Oakland sounds from the Smart Bomb collective and Samplelov.